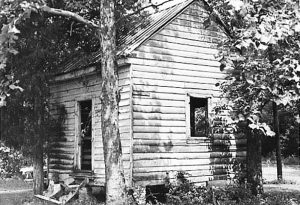 Photo is a representation. This is a slave house at Magnolia Plantation

Isabell Meggett Lucas was born in a former slave cabin. Today, that cabin sits inside the new Smithsonian National Museum of African American History and Culture as an example of home life for slaves in the South. During a recent visit to the new museum, Lucas and her family had the opportunity to share with the museum a first-hand glimpse of how descendants of enslaved Africans lived in the post-Civil War and Jim Crow South. The cabin was rebuilt as part of the “Slavery and Freedom” exhibition in the museum almost exactly as it was when the last occupant lived there in 1981. Believed to be one of the oldest preserved slave cabins in the United States, it sat on the Point of Pines Plantation from 1851 until it was moved plank by plank to the museum. Having this cabin in the museum will give people the chance to learn what life was like in the past and understand the hardships the Meggett family as well as many other families dealt with.