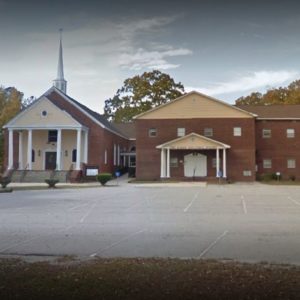 This African American church was organized c. 1865 when four men left Sandy Level Baptist Church, founded before the Revolution with both white and black members, to form their own congregation. They elected Rev. Joe Taylor as their first pastor and held early services in a brush arbor nearby. The first permanent church here, a log building, was replaced by a frame church 1907-1922 during the pastorate of Rev. T.H. McNeal. It was covered in brick veneer in 1941, then extensively renovated 1964-1978, during the pastorate of Rev. A.J. Grove, Sr. The historic church cemetery dates to the 1880s.