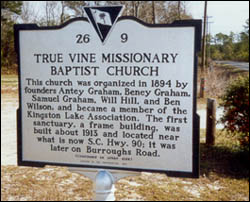 This church (c. 1894) was organized by Antey Graham, Beney Graham, Samuel Graham, Will Hill, and Ben Wilson. The first sanctuary, a frame building, was built about 1913 and located near what is now S.C. Hwy. 90, it was later on Burroughs Road. In 1943 the old sanctuary was moved to this site by a team of mules. The present brick sanctuary, the second serving this congregation, was built in 1971. Marker was erected by the Congregation, 1999.