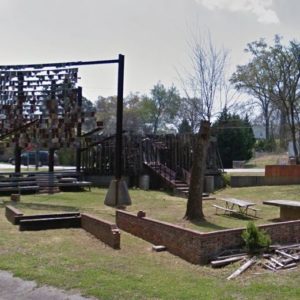 This area was a hub of African American life from the late-19th to mid-20th centuries. On site were the Anderson County Training School, built c. 1922, the Faith Cabin Library, built c. 1935 and a frame store, c. 1900, built nearby by Benjamin Horace Keese (1881-1975). Long known as the “Keese Barn,” it was a favorite gathering place for many years. In 2003, Clemson University architecture students dismantled the Keese Barn and reused its historic materials to build the Memorial Block to honor the store and its significance in Pendleton.