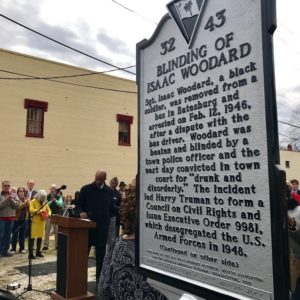 The Blinding of Isaac Woodard

Sgt. Isaac Woodard, a black soldier, was removed from a bus in Batesburg and arrested on Feb. 12, 1946, after a dispute with the bus driver. Woodard was beaten and blinded by a town police officer, charged, and convicted for being “drunk and disorderly.” The incident led Harry Truman to form a Council on Civil Rights and issue Executive Order 9981, which desegregated the U.S. Armed Forces in 1948. The police officer was charged with violating Woodard’s civil rights but was acquitted by an all-white jury. The result troubled the presiding judge, J. Waties Waring, who would go on to issue landmark civil rights rulings, including a dissent in Briggs v. Elliott (1952), which became a model for Brown v. Board of Education (1954). In 2018, a judge, on the town’s motion, expunged Woodard’s conviction.