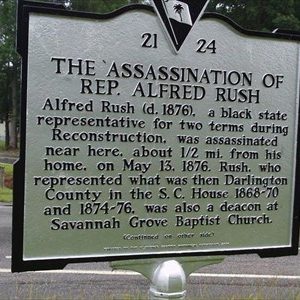 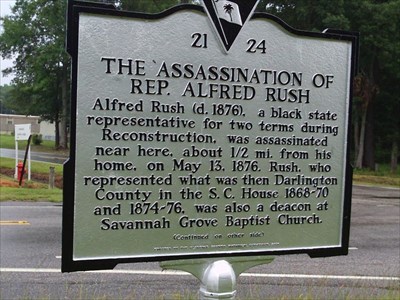 The Assassination of Rep. Alfred Rush

Alfred Rush (d. 1876), an African American state representative for two terms during Reconstruction, was assassinated near here, about 1/2 mi. from his home, on May 13, 1876. Rush, who represented what was then Darlington County in the S.C. House 1868-70 and 1874-76, was also a deacon at Savannah Grove Baptist Church. Rush and his wife, returning from a picnic at Mt. Carmel Church near Timmonsville, were ambushed by an unknown gunman. Alfred Rush was killed instantly. Several black Darlington County officials wrote Gov. D.H. Chamberlain, “this was a cold blooded murder and our people are very much excited over it.”