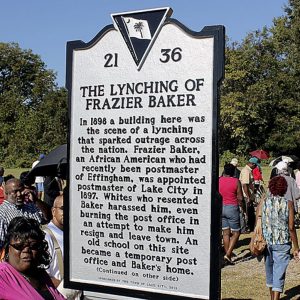 The Assassination of Frazier Baker

In 1897, local black schoolteacher Frazier Baker was appointed postmaster of Lake City by the new Republican administration of President William McKinley. With a new state constitution just adopted to remove blacks from politics, many white South Carolinians were incensed at such appointments. On the night of February 21, 1898, after a campaign of harassment and arson, a mob set fire to the temporary post office on this site and shot at Baker and his family as they attempted to flee, killing him and an infant daughter and injuring the rest. A subsequent federal case against 11 defendants resulted in a mistrial.