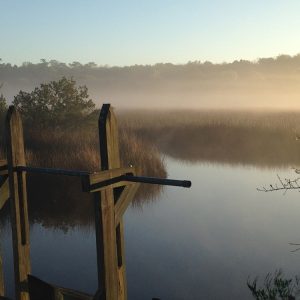 On September 9-10, 1739, an Angolan slave named Jemmy led a slave rebellion involving some 80 slaves enlisted from area plantations. After attacking a warehouse and seizing weapons, the slaves marched toward St. Augustine, Fla., burning homes and buildings and killing whites. The militia apprehended the group, and almost 40 slaves were killed in the resulting fighting. This slave rebellion played directly into the fears of the white population and led to the passage of the most comprehensive slave codes in the English colonies, which remained in place until the end of the Civil War.

North side of U.S. Hwy. 17 & the W. bank of the Wallace River Rantowles vicinity