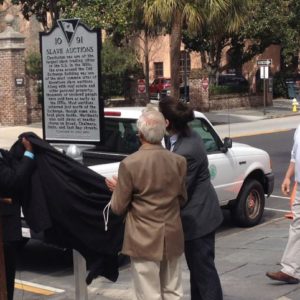 Charleston was one of the largest slave trading cities in the United States. In the 1800s, the area around the Old Exchange Building was one of the most common sites of downtown slave auctions. Along with real estate and other personal property, thousands of enslaved people were sold here as early as the 1770s.  Most auctions occurred just north of the Exchange, though some also took place inside. Merchants also sold slaves at nearby stores on Broad, Chalmers, State, and East Bay streets. Enslaved Africans were usually sold at wharves along the city harbor. Some Africans were sold near the Exchange, but most people sold here were born in the U.S., making this a key site in the domestic slave trade. In 1856, the city banned auctions of slaves and other goods from the Exchange. Indoor sales grew elsewhere, and Ryan’s Mart, a complex of buildings between Queen and Chalmers streets, became the main downtown auction site.

This historical marker was sponsored by the Old Exchange Building, 2016