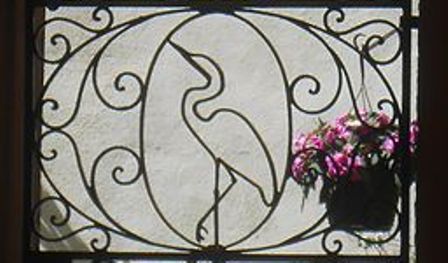 Born on a barrier island in 1912, Philip Simmons became an apprentice blacksmith at the age of 13.  Simmons created many of Charleston’s finest 20th century wrought iron gates, fences, balconies, window grilles, and other decorative pieces.  Local businessman Jack Krawcheck commissioned Simmons’ first gate and placed it behind his clothing store on King Street. His work is also on display in the Charleston Museum, the South Carolina Museum and the Smithsonian.  Many of his gates incorporate elaborate designs such as hearts, trees, and a variety of animals.  Simmons’ workshop lacked electricity and many of the tools he used were handcrafted at least a century earlier.  The National Endowment for the Arts awarded him its highest award, a National Heritage Fellowship, in recognition of his life’s work in 1982.  His home and workshop, at this location, have been converted into a museum that is open for public tours.