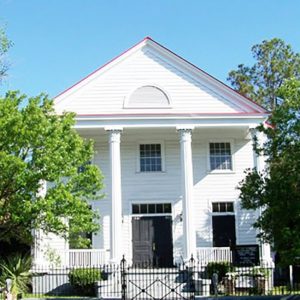 African American members of this church, including Denmark Vesey, left in 1817 to form Charleston’s first African Methodist congregation. When that congregation was forced to disband after Vesey was arrested for plotting a slave rebellion, many members returned to Bethel. By 1852, the original building was used for African American class meetings only, then donated to the black congregation in 1876. In 1880, it was moved to its current location and renamed Old Bethel Methodist Church. Bishop Francis Asbury preached in the church several times in the late 18th and early 19th centuries.