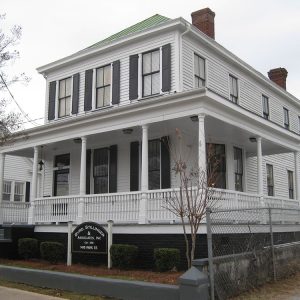 Nathaniel J. Frederick, educator, lawyer, newspaper editor and civil rights activist, lived here from 1904 until his death in 1938. This house was built in 1903 by Cap J. Carroll, a prominent businessman and city official whose daughter Corrine married Frederick in 1904. Frederick, who was educated at Claflin College and the University of Wisconsin, was admitted to the S.C. bar in 1913. He argued more cases before the Supreme Court of S.C. than any black lawyer of his day. Frederick was principal of the Howard School 1902-18 and president of the State Negro Teachers Association.  From 1925-38, he edited The Palmetto Leader, one of two major black newspapers in S.C.