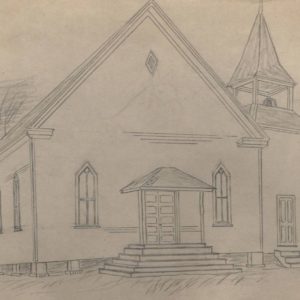 The formal organization of Mulberry A.M.E. Church dates to c. 1871, but many of the founding members were formerly enslaved people who had a tradition of religious organization that stretched back into slavery.  Early meetings were held under a brush arbor.  By 1872 members had built a log building. A second frame church was built in 1878 and remained until it burned in 1918. The current Carpenter Gothic church, with offset steeple and church bell, dates to 1919.  A cemetery, located across the road from the church, was established c. 1904.  The one-teacher Mulberry School was once located here and served African American students until it closed in the early 1950s.  Mulberry is mother church to St. Peter, Shady Grove and St. Paul A.M.E. churches in Abbeville. Sponsored by the Essie Strother Patterson Legacy Foundation, 2017.