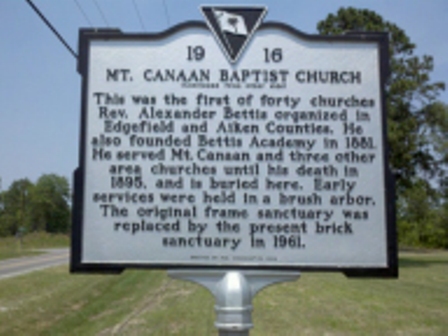 Founded in 1868, this was one of the first black Baptist churches in this area.  Alexander Bettis (1836-1895), a former slave, established the congregation with the assistance of three white ministers after the local Baptist association refused to ordain him.  Mt. Canaan grew from seventeen charter members to more than 2,000 members in only three years.  It was the first of some 40 churches Bettis organized in Edgefield and Aiken counties.  He also founded Bettis Academy in 1881.  Bettis is buried in the church cemetery.  The original frame sanctuary was replaced by the present brick one in 1961.