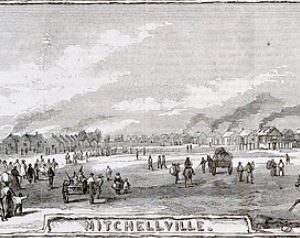 After Hilton Head’s fall to Union forces in 1861, this town was planned for the area’s former slaves and named for General Ormsby M. Mitchel.  It was developed into neatly arranged streets and Ľ-acre lots.  The town had elected officials, a church, laws, taxes and a school for children, and was home to about 1,500 residents in 1865.  The village continued relatively intact until the 1870s and was abandoned by 1890.