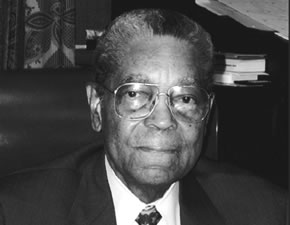 Matthew J. Perry, Jr., lawyer, civil rights pioneer, and jurist, lived in a house on this site as a youth, the house was torn down in 1997.  He served in the U.S. Army during World War II, then graduated from S.C. State College in 1948.  After graduating in the first class of S.C. State’s Law School in 1951, Perry practiced law in Spartanburg, specializing in civil rights cases.  Perry returned to Columbia in 1961 as chief counsel of the NAACP.  For 15 years he tried numerous civil rights cases before the U.S. Supreme Court.  In 1979 he became the first black U.S. district court judge in S.C.

On Washington Street between Pine and Oak streets Columbia