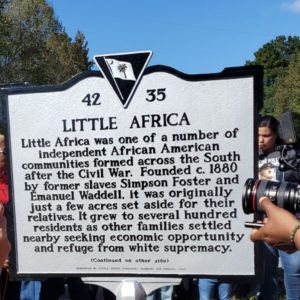 “Little Africa” was one of a number of independent African American communities formed across the South after the Civil War.  Founded c. 1880 by former slaves Simpson Foster and Emanuel Waddell, it was originally just a few acres set aside for their relatives.  It grew to several hundred residents as other families settled nearby seeking economic opportunity and refuge from white supremacy.  Many early residents were farmers, and agriculture remained central to life in Little Africa for decades.  By 1910, community leaders had built the two-room Africa School to teach local children.  One of S.C.’s first Rosenwald Fund schools later opened there.  Near the school, community members built Fairview C.M.E. c. 1912, .5 miles east of here.  Congregants first organized themselves a decade earlier.