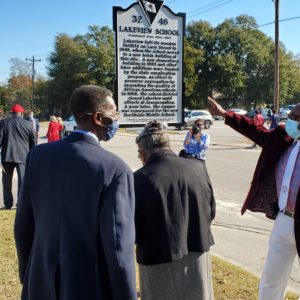 This was the last site of a segregated school for Black residents of West Columbia with roots extending to at least the early 1900s.  First called the Brookland or New Brookland Colored School, it was located on Lacy Street by c. 1931 when it served grades 1-8.  Grade 11 was added in 1938-1939, making it then a 4-year high school with 4 initial graduates. In 1939, the community renamed the school “Lakeview” for its location overlooking nearby “Horseshoe Lake.”

Lakeview left its wooden facility on Lacy Street in 1949 when the school moved to a new brick building at this site.  A new elementary building in 1953 as well as later additions were funded by the state equalization program, an effort to preserve segregation by upgrading the quality of African American schools.  In 1968 the school district closed Lakeview amid efforts at desegregation.  The next year, the campus was repurposed for the new Northside Middle School.