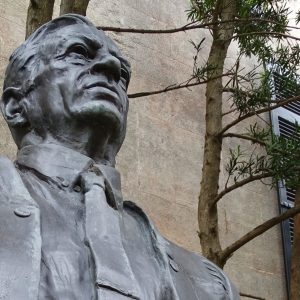 The Honorable Julius Waties Waring became a federal judge in 1942.  Waring, an eighth generation Charlestonian and son of a Confederate veteran, made a number of important rulings that confounded his contemporaries and advanced the civil rights aspirations of African Americans nationwide. During his tenure, Judge Waring issued decisions that ordered equal pay for African American school teachers in South Carolina, gave African Americans access to a state-funded law school, and permitted African Americans to vote in the state’s party primaries.  He also integrated his courtroom staff.

Waring’s most important ruling was his dissenting opinion in Briggs v. Elliott (1951), one of five cases combined into the landmark public school desegregation case Brown v. Board of Education (1954).  “Segregation in education can never produce equality.  It is an evil that must be eradicated,” Waring wrote.  He and his second wife, Elizabeth, were shunned by Charleston society.  Locals smashed the windows of their home with bricks and planted burning crosses on their front lawn.  Although his rulings in support of equality led to his estrangement from family and friends, Judge Waring has since been recognized as an important figure in the civil rights struggle.

This commemorative statue was dedicated in April 2014.