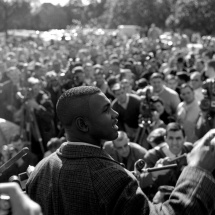 Clemson University became the first white college or university in the state to integrate after Reconstruction.  Harvey B. Gantt, a Charleston native wanting to study architecture, applied for admission in 1961.  When Clemson delayed admitting him, he sued in federal court in the summer of 1962.  President Robert C. Edwards, meanwhile, worked behind the scenes to make plans for Gantt’s eventual enrollment.  Edwards and several leading businessmen, politicians, and others drew up an elaborate plan, described as “a conspiracy for peace,” designed to ensure that Gantt would enter Clemson without the protests and violence that marked the integration of other Southern universities.   After a federal court ruled that Clemson should admit him, Gantt enrolled without incident.  He graduated with honors in 1965.

Near Tillman Hall on the Clemson University Campus Clemson