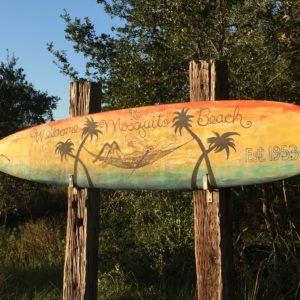 Located 1.5 miles SW from here, Mosquito Beach is a .13 mile strip of land that served African Americans during the Jim Crow era, when nearby Folly Beach was segregated.  The beach began as a gathering spot for workers at a nearby oyster factory in the 1920s and 1930s.  A store selling seafood and drinks first opened in the 1930s.  Other businesses followed in the 1940s and 1950s.

Mosquito Beach lies along a tidal marsh historically known for the large mosquito population that gave the beach its name.  By the 1960s, the beach provided African American leisure-seekers with music venues, pavilions, restaurants, and a hotel.  Mosquito Beach’s businesses as well as the land were owned by African Americans.  Listed in the National Register of Historic Places in 2019.