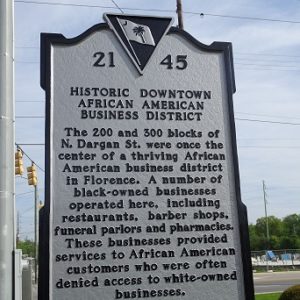 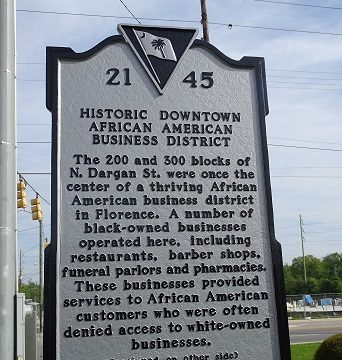 The 200 and 300 blocks of N. Dargan St. were once the center of a thriving African American business district in Florence. A number of black-owned businesses operated here, including restaurants, barber shops, funeral parlors and pharmacies. These businesses provided services to African American customers who were often denied access to white-owned businesses. By the first decades of the 20th century North Florence had become the principal African American residential district as patterns of racial segregation became more fixed. The shops located on N. Dargan St., just north of the Atlantic Coast Line Railroad, served the predominantly African American residents who lived and worked here.  This historical marker was sponsored by the City of Florence in 2017.