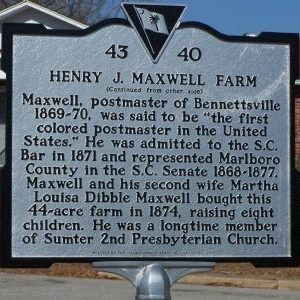 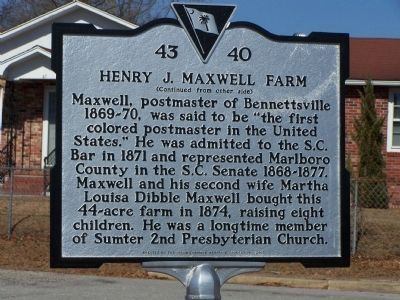 Henry Johnson Maxwell (1837-1906), Union soldier, U.S. postmaster, state senator, and lawyer, lived here from 1874 until his death in 1906. Maxwell, the son of Stephen J. and Thurston Johnson Maxwell, was born free on Edisto Island. After serving as a sargeant in the 2nd U.S. Colored Artillery, he returned to S.C. to teach and work for the Freedmen´s Bureau in Bennettsville. Maxwell, postmaster of Bennettsville 1869-70, was said to be “the first colored postmaster in the United States.” He was admitted to the S.C. Bar in 1871 and represented Marlboro County in the S.C. Senate 1868-1877. Maxwell and his second wife Martha Louisa Dibble Maxwell bought this 44-acre farm in 1874, raising eight children. He was a longtime member of Sumter Second Presbyterian Church.