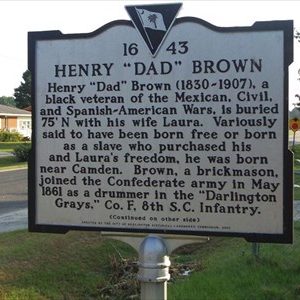 Henry “Dad” Brown, a local blacksmith, landowner, and veteran of the Mexican-American, Civil, and Spanish-American Wars, is buried a few yards from here with his wife, Laura Cannon Brown. Variously said to have been born free or having purchased his and his wife’s freedom, Brown joined the Confederate army in May, 1861 as a drummer and served for the rest of the war. During Reconstruction he served briefly as county coroner but resigned and allied himself with conservative whites. From 1878 to 1907 he was a drummer in the “Darlington Guards,” a militia unit that served in Cuba in 1898.