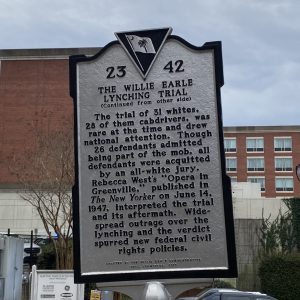 This Beaux Arts building, built in 1916-18, was the fourth Greenville County Courthouse, from 1918 to 1950. It was listed in the National Register of Historic Places in 1994. The largest lynching trial in U.S. history was held here May 12-21, 1947. Willie Earle, a young black man accused of assaulting white cabdriver Thomas W. Brown, had been lynched by a white mob on Bramlett Road in Greenville.

The trial of 31 whites, 28 of them cabdrivers, was rare at the time and drew national attention. Though 26 defendants admitted being part of the mob, all defendants were acquitted by an all-white jury. Rebecca West’s “Opera in Greenville,” published in The New Yorker on June 14, 1947, interpreted the trial and its aftermath. Widespread outrage over the lynching and the verdict spurred new federal civil rights policies.