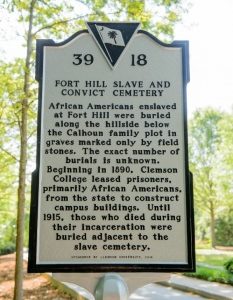 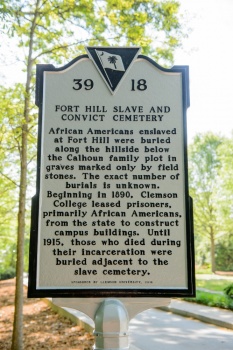 Located one-eighth mile from the main house, the Fort Hill slave quarters were described in 1849 as being “built of stone and joined together like barracks, with gardens attached.” Some 70-80 enslaved African Americans then lived at Fort Hill. In 1854, Andrew P. Calhoun moved to Fort Hill from Alabama with his slaves. At his death in 1865, the estate included 139 enslaved African Americans. In 1890, convicted laborers, mostly African Americans, were jailed in a prison stockade nearby. They cleared land, and made and laid bricks. They also dismantled the stone slave quarters to use as foundations for Clemson College’s earliest buildings.