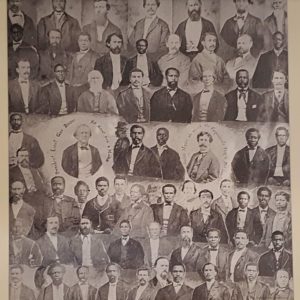 In January 1868, delegates met to rewrite the South Carolina Constitution. They convened at the Charleston Club House, which once stood nearby.  Before the Civil War, the Club House was reserved for Charleston’s planter elite, but a majority of the delegates in 1868 were African American, some of them former slaves. The election of delegates to the convention was the first time that African American men voted in South Carolina.

The 1868 Constitution was a remarkable document for its time. The Declaration of Rights made no distinctions based on race. It created the basis for the state’s first public school system, as proposed by Robert Smalls, and guaranteed black male suffrage two years ahead of the 15th Amendment. In 1895, a new constitution would mandate segregated schools, outlaw interracial marriages and disenfranchise black men.