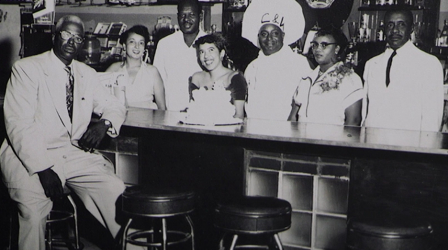 Charlie and Sarah Fitzgerald opened Charlie’s Place as a supper club in 1937. It was a stop on the “Chitlin’ Circuit,” nightclubs where black entertainers such as Billie Holiday, the Mills Brothers, Little Richard, Ruth Brown, Otis Redding, and The Drifters performed during the era of racial segregation. While the club is gone, the Fitzgerald Motel, built in 1948, remains. The motel served black entertainers who could not stay in whites-only hotels.

Oral tradition holds that “the Shag,” a form of southern swing dancing, originated here. Both white and black customers gathered here to listen to music and dance. In 1950 the Ku Klux Klan led a parade through “The Hill,” the African American neighborhood where Charlie’s Place was located. The Klan returned later and shots were fired into the club, injuring many. Charlie was severely beaten but survived. Some Klansmen were charged, but no one was prosecuted.