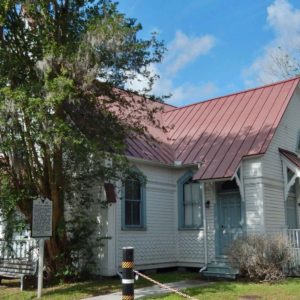 Samuel J. Bampfield, an influential African American political figure during Reconstruction, was the founder of Berean Presbyterian Church. He served as postmaster, clerk of the Beaufort County court, and a member of the South Carolina House of Representatives.  The congregation purchased this lot in 1892 and built a Gothic Revival style church.  Solomon P. Hood, a future U.S. Minister to Liberia, was appointed as its first pastor.